It’s been almost a week since I attended the private view of Nasan Tur‘s first UK solo exhibition at Blain Southern. And it’s not that I’ve been putting off writing this blog, but rather that I’ve needed some time to really let the German artist’s commanding work sink in, to make some sense of the powerful messages his art brings forward so rawly.

The first thing that struck me as I entered the space on Wednesday 25 March was the incredible range of works on view. The exhibition includes video, woodcuts, painting, sculpture, neon and collage, all executed with precision and purpose. But far from merely looking good, or strange, or interesting, each piece goes beyond just making a point about society and the human condition, instead grinding this point into the viewer’s head so that it’s palpable, inescapable, impossible to ignore.

The most painful yet rewarding example of this for me is ‘First Shot’ (2014). This video depicts several people, one after the other, picking up a gun, examining it and then shooting it for the first time. The entire soundtrack of the piece is silent except for the blast itself, which can be heard even in the other rooms of the gallery, making me jump every time, even when I knew it was coming.

By setting the video in slow motion, each sliver of movement by the subject, no matter how small, becomes important. In turn, an action we are so used to seeing on television, an action we have almost become immune to as a society — shooting a deadly weapon — is brought forth for what it really is, lethal and terrifying, a powerful reminder both of the force of the firearm and our fragility as human beings. Beyond that, the work is a call for re-examination of our entire worldview. Why do we trivialise something so very far from trivial?

The theme of human fragility is also of concern in ‘Fragments,’ a work inspired by Nasan’s time spent at Villa Massimo in Rome surrounded by various broken bits of iconic classical sculpture. But whereas these sculptures became mere fragments of their once fully human forms over time and presumably by accident, Nasan’s are broken intentionally, the art is in the fragments, begging the question if an artwork can be broken and still considered beautiful, cannot a broken soul be beautiful as well? Does it not deserve the same amount of love and respect as one fully in tact? 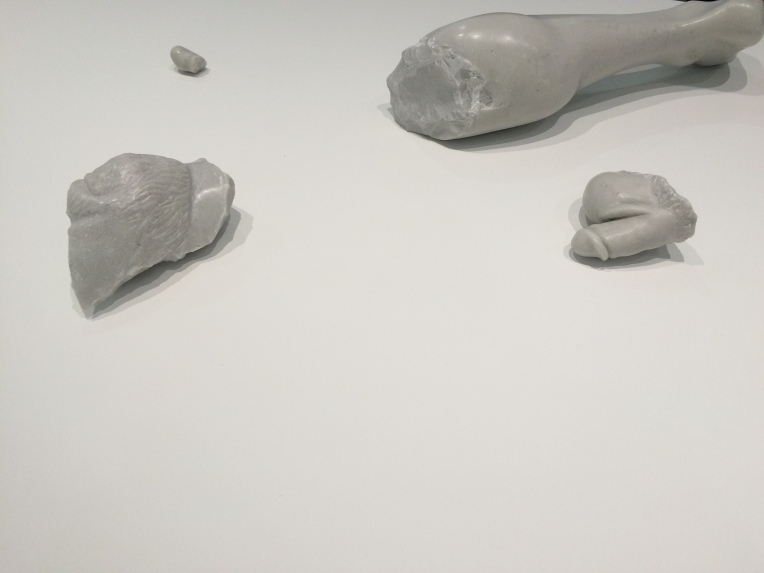 These tough questions are everywhere in Nasan’s work. In ‘Police Painting’ (2014), for example, the artist delves into the issue of free speech by reproducing in the gallery an actual image he saw on the street of graffiti that’s been covered over by police. In this seemingly simple smattering of dark grey paint, we are called upon to contemplate what constitutes censorship along with its dangers and consequences. In our longing to see what lies below the cover-up, we are forced to consider if painting over the graffiti, is perhaps as much, if not more of a crime than the graffiti itself.

Another set of artworks I found particularly moving are Morality is Ridiculous and Humanity is Weak, two 2015 woodcuts, each displaying the phrase in their titles. By using the woodcut medium, the artist has given the opportunity for endless reproduction, endless reach of the idea, because of course the woodcut is the oldest means by which to print. But in these pieces, rather than convince us of the sanctity of the phrases, the artist reminds us of the frightening reality: how easy it is to spread a litigious and potentially destructive idea.

I’ve thought about this show at least once-a-day since last Wednesday’s opening, a different image invading my mind each time, pushing me to attempt to figure out some type of solution to the uncomfortable truths Nasan so eloquently examines. These are not artworks I think of with a smile. Many are difficult to look at and even more painful as you begin to comprehend them, but they are works which hold the power to invoke change. I would be lying if I said the exhibition was easy, but then again, what’s truly worth it seldom is.