ArtAttack visited the Tate Modern today and experienced a rollercoaster of emotions. On the one hand, we viewed an exhibition everyone should see, ‘The EY Exhibition: The World Goes Pop,.’ to develop their minds on traditional Pop Art and its’ relationship with politics, culture and feminism. In complete contrast we were privileged to view an artists’ experiment ‘Blindly,’  a painting workshop with a small group of visually impaired participants.

In a collaboration of 9 rooms we were challenged to view Pop Art in an alternative light. What is normally associated with American and British phenomenon was expanded geographically showing how different cultures from around the world have influenced various artists through diverse mediums with exceptional results.

Whilst there was an array of imaginative work to discuss, there were 3 pieces that had a lasting impression on me. Firstly, and with an obvious political connotation, the 1974 oil painting, titled ‘The Smile, or Thirty Years, Ha, Ha, Ha Usmiech, Czyli ‘Trzydziesci’ – Iac. ‘Cha Cha Cha’ by Polish Artist Jerzy Ryszard ‘Jurry’ Zielinski, depicts a painting of a mouth-sewn shut reflecting its significance to polish society. The XXX symbol represents the thirtieth anniversary of the People’s Republic of Poland in 1974 and was used on coins, stamps and posters. With an ironic smile and the lips sewn shut, Zielinkski suggests an enforced silence against the misleading propaganda. With its undeniable statement, I found its’ simplicity so true to pop art that it can still be a piece of art for ones’ home. 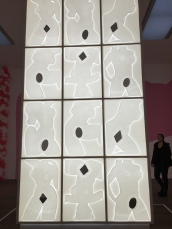 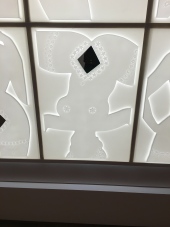 With a strong topical influence of feminism, Bratislavian graphic designer and illustrator Jana Zelibska composed a 3-dimensional piece using non-traditional art materials such as fabric, neon, plastics and mirrors. Although this piece of work was intended to be shown on the street, it was deemed too explicit. ‘Kandarya-Mahadeva’ with its influence from tantric Hinduism and erotic rituals, outline bodies of female dancers with their genitals having been replaced by mirrors inhibiting any attempt of voyeurism. The female genital is a really personal place, hence why people refer to it as ‘your privates’. Using mirrors, you are forcing the viewers to confront themselves in a personal and private way. The installation is extremely large and therefore doesn’t give the viewer a way to avoid coming face to face with themselves. The whole room encompassed an unusually spiritual and calm atmosphere with the illuminated central piece having the biggest impact.

Having viewed ‘The World Goes Pop‘, the piece “Red Coat’ especially fascinated me. Watching footage and seeing the Red Coat in question in its entirety, seemed like an extreme social experiment designed by Nicola L. The coat was designed to protect eleven musicians performing in the rain and defining them as one unit, liberating them from the distinction of class, gender and ethnicity. It had such an impact that after the concert Nicola L took the coat to various countries inviting people to wear this collective skin and walk through the streets representing a period at the end of 1960’s of brief political freedom. The 1960‘s saw direct political action taking place, and the image of protesting groups pouring onto the streets became symbolic to that decade. Within Room 8: Pop Crowd, it is obvious to a viewer the direct comparison between all of the pieces of art whether it is the life-size paper sculptors by Henri Cuceo or the united group of eleven coats. At first glance I personally viewed this installation as eleven individual sculptures but on closer inspection, all became clear.

Having viewed this cultural topic, albeit colourful, fun and vibrant, next on ArtAttack’s artistically stimulating journey, I found myself completely captivated by the exhibition, ‘Blindly’. This illustrates 18 minutes of footage taken in 2010; I felt this was a piece of art itself, taken from a painting workshop by polish artist Artur Zmuewski. You may ask yourself why would this be so interesting – but the workshop was for a small group of adults with no sight. They were asked to produce a self-portrait, a landscape and an animal, painting on large sheets of paper on the ground. Some of the participants were blind from birth and some had experienced loss of sight after an accident or illness. The results were astounding and very personal with unintentional abstract elements. One will witness that while some of the participants have a positive experience and joyful time painting, others are clearly frustrated, as they want to produce an accurate interpretation but are unsure of their work. We are drawn into the pleasure one lady gains from her use of painting with both her hands and feet and her feeling of freedom. Then we sadly view the frustration of a man who wants to please and is relying on his knowledge only and appears disheartened as he cannot see the results. We are left understanding the importance and delicacy of our senses, we can see how the loss of sight heightens our sense of touch, which became the participants primary source of expression; figuring out the dynamics of their composition with their hands only. The viewers witness one individual feeling his way around the canvas to locate ‘what was where’. This is a must-see exhibition to expand one’s sensitivity to the challenges faced by people living with disabilities everyday and how art is used as a means of individual interpretation. 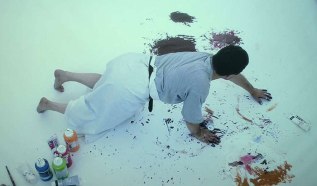