After reading Brautigan’s 1976 novel, Lilias became almost obsessed by the narrative, stopping people in the street who resembled its characters and practically buying eBay out of sombrero postcards. The result is this upcoming exhibition of technical, charming and at times chilling artworks.

Familiar desert landscapes intertwine with striking elements of collage and pencil drawings depicting strange encounters. Not having read the book makes it a bit tricky to figure out what’s going on, but somehow at the same time seems to make the work all the more intriguing.

‘Logic’ Courtesy of the Artist and Shapero Modern. 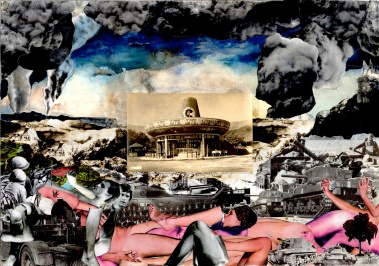 ‘AZ 1492! Sombrero Town’ Courtesy of the Artist and Shapero Modern.

We were delighted to be able to speak with Lilias about her practice, this body of work and what’s to come for the London-based artist, whose work is already in the collection of HRH the Prince of Wales. 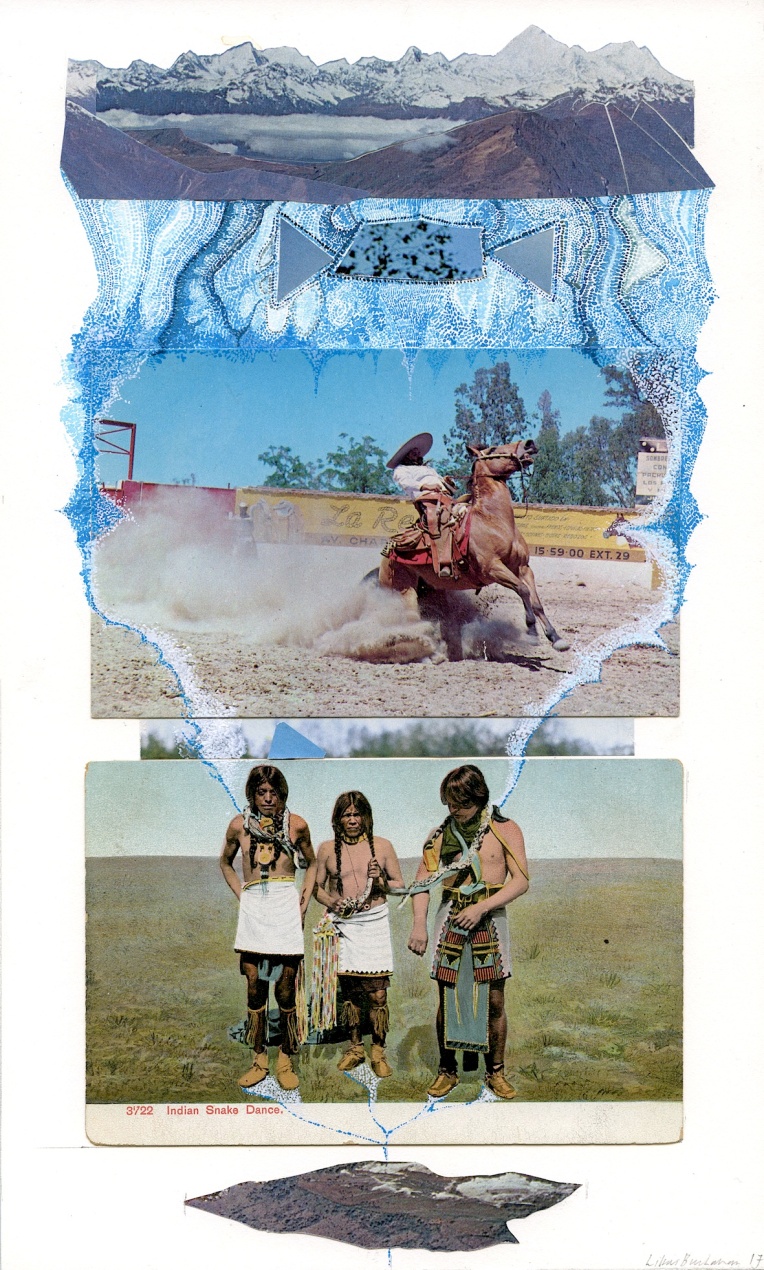 ArtAttack: Why Richard Brautigan? Was he an author you had encountered before reading Sombrero Fallout? What is it about his writing that inspired you to create art?

Lilias Buchanan: I first heard about Richard Brautigan after listening to The Lovely Egg’s song, Have You Ever Heard An Electric Accordian?

The song sparked curiosity in me and I began to spend time studying the strangeness of his writing, but yes the novel Sombrero Fallout in particular. I related strongly to the poignant story of the lonely writer in his apartment and the obsessive madness for love that overcomes him; the desperation of finding that single strand of hair. I was drawn to the way the chapters jumped between the stark monochrome light of reality and the crazy fantasy story of the sombrero town in the wastepaper bin. I was excited by the challenge of trying to capture this change in scene setting and emotion and the chaos of the protagonist’s mind in the story (I do feel that the story is very autobiographical. William Hjortsberg writes in his biography of Brautigan, Jubilee Hitchhiker of a Pirandellian Paradox. ‘When an author turns out to be a character in the story he is writing’ ) and comparing it to the monochrome exterior. This really fascinated me so I began to try and make work based around it. This book was written at a time in Brautigan’s life where he was becoming sad and desperate, yet he still continues to amuse us readers with his dark sense of humour.

I was drawn to the story, the bittersweetness of it all. Like dancing along to a Dusty Springfield song; there is a deep sadness there, hidden behind jangling major chords.

AA: What is your first memory of art and when/why did you decide to pursue art as a career?

LB: There’s nothing else I could ever do really! My mind can’t do anything else. I feel I can only really awaken, shake off the sleepy dust when I paint and draw. It’s my armour in this world, fighting against all the sput.

I’m not entirely sure what my first memory of art is, although I was drawn to Maurice Sendak’s paintings in his book Out Over There from a very early age. My mum read it to me as a child and it’s stayed vivid in my mind. Still to this day, I love looking at those works. The exquisite Leonardo-esque details in the drawings of folds, the haunting goblin characters.

The baby crawling out of the egg.

Like familiar smells from childhood, those illustrations conjure up strong emotions of when dreams were as strong as reality.

AA: This show is made up mostly of works done in watercolour, pencil and collage. Are these the mediums in which you normally work and if not, what brought on these choices?

LB: Yes, the book’s storylines definitely inspired me to begin using collage for the first time, and straying away from just making works in my usual pencil and paint . It was very important to me that I expressed the contrast between the two story lines, so graphite monochrome for the stripped back reality and rich psychedelic colour for the sombrero wastepaper basket world. There is a chaos in that story that could only really be depicted in a chaos of images, in a Hieronymus Bosch kind of a way. I wanted to keep tying the works back to the 1970’s when the book was written so a lot of the photographs are from magazines from that time, porno clips and old House and Garden magazines from the attic.

AA: How do you feel art school changed you as an artist?

LB: When I think back to my time at art school I think back to my tutors and how they influenced the development of my work. At Central Saint Martin’s, I was taught by the installation artist Sophie Clements who really encouraged me to develop my drawing. So after my BA at CSM I took part in The Drawing Year at The Royal Drawing School. The year dramatically improved and changed my understanding of drawing. I was heavily influenced by the painter Ishbel Myserscough’s teachings at the school and her fascination for drawing hair.

AA: What’s next for you?

LB: Ah, well. There are many ideas on my mind.

I am working on a series of drawings inspired by my Great Great Grandfather’s memoirs. He was a Prisoner of War at Terezin concentration camp and Pankratz Prison in the Czech Republic during World War II . He wrote this horrifying yet gripping account of his experience. My ambition is to publish an edition of books with prints of my drawings alongside the writing.